About Poems I Will Never Release

Through the eyes of the curators

Give me a break from these preppy talks

Through the eyes of Audrey Cottin 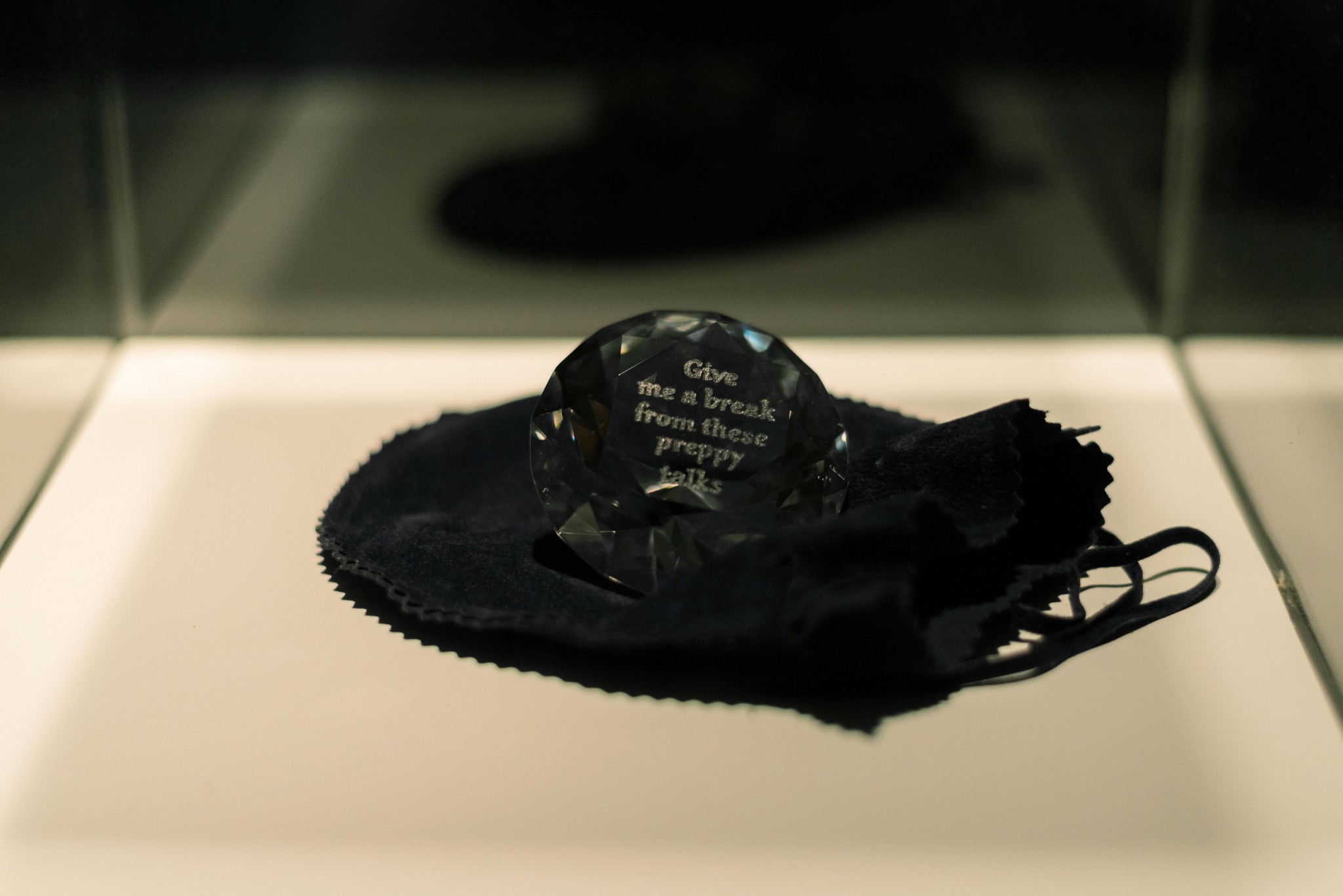 On October 9th, La Loge will host a transdisciplinary public programme of lectures about and relating to Chiara Fumai’s powerful practice which she defined as her “Unwork”. Her so-called “unwork” is a gesture of protest and feminist claim, (“unwork” is composed of the verb “to work” and the private prefix “un-”, a way to get out of the patriarchal-capitalist logic of work). The artist’s ability to interpret the language of performance and the strength of her feminist commitment reignite ever-relevant conversations on patriarchal violence, and make her one of the most unique and striking contemporary figures of our time. During this intensive programme, art historians, art critics, philosophers, and curators will analyse the problematics and timeliness of “Unwork”, thus providing an opportunity as for a collective rethinking of the complexities and constellations that Fumai’s work reveals.

15:00
Natasa Petrešin-Bachelez : Undoing the patriarchy, but also the diva

16:30
Giulia Palladini : Possession without property: the unwork of Chiara Fumai

17:15
Emilie Notéris : The Mediumship is the Message: Channeling an Army Of Feminist Ghosts

18:00
Emily Verla Bovino : Performance of Witchcraft in the Practice of Artist Chiara Fumai

Fabienne Brugère is Professor of Philosophy at the University Paris 8 Vincennes-Saint-Denis. She is President of Paris Lumières University. She is a member of the editorial board of the Journal Esprit. She is responsible (in collaboration with Guillaume le Blanc) for the collection "Diagnostics" published by Editions du Bord de l'Eau and (in collaboration with Claude Gautier) for the collection "Perspectives du care" published by Editions de l'ENS Lyon. She has also taught at the Universities of Hamburg, Munich and Quebec. She is working on the philosophy of art, on moral and political philosophy. She has published many books : Le sexe de la sollicitude, Seuil, 2008; Philosophie de l’art, PUF, 2010 ; L’éthique du care, PUF, 2011; Faut-il se révolter, Bayard, 2012 ; La politique de l’individu, Seuil, 2013, with Guillaume le Blanc, La fin de l’hospitalité, Flammarion, 2017 and in 2019 On ne naît pas femme, on le devient, Stock and Care Ethics. The Introduction of Care as a Political Category, Peeters.

Florence Cheval practices writing-with, curating-with, researching-with. They are studying with poet Ariana Reines in the context of the Invisible College, a visionary learning space for poets & artists. Together with curator, researcher and sociologist Greg Nijs, they are currently setting up drama, a nascent curatorial spacecraft hovering between visual arts and writing. Since 2019, they have been developing Intersections of Care with transdisciplinary art worker Loraine Furter, a collective research project on intersectional feminist modes of display and curating.

Émilie Notéris is a textworker, born in 1978. In her latest book, Alma Matériau published in 2020 by Paraguay Press, she focuses her analysis on artworks made by women in the 20th and 21st centuries, and the need for them to constitute their own genealogy. The official art history being still too busy with fathers and their offspring to take the mothers into account. Biological or elective, they offer other tools and other reasons to create, within a multitude of rhizomatic stories.

Giulia Palladini is a researcher and critical theorist, working between different languages, and fields of knowledge. In her work she explores the politics and erotics of artistic production, as well as social and cultural history from a Marxist and feminist perspective. She is currently Senior Lecturer in Drama, Theatre and Performance at the University of Roehampton in London. She has previously worked in Germany as Alexander von Humboldt fellow, and taught in the MA Raumstrategien at the Kunsthochschule Berlin-Weissensee. She has lectured in various international universities, and collaborated as theorist in a number of critical and artistic projects in Europe and Latin America. She is the author of The Scene of Foreplay: Theater, Labor and Leisure in 1960s New York (2017) and co-editor (with Marco Pustianaz) of the volume Lexicon for an Affective Archive (2017). In 2021, she led the international research cluster ‘Feminismos Antipatriarcales and Poetic Disobedience’, part of the two years project ‘Queer Feminist Currents’.

Nataša Petrešin-Bachelez is Cultural Programmes Manager at the Cité internationale des arts. She is an interdependent curator, editor and writer. Among the exhibitions she curated are Contour Biennale 9: Coltan as Cotton (2019, Mechelen); Defiant Muses: Delphine Seyrig and the Feminist Video Collectives in France (1970s-1980s) at LaM, Lille and Museum Reina Sofia, Madrid (2019-2020, with Giovanna Zapperi); Show me your archive and I will tell you who is in power at Kiosk, Ghent (2017, with Wim Waelput); Let’s Talk about the Weather at the Sursock Museum, Beirut and Times Museum, Guangzhou (2016 and 2018, with Nora Razian); Resilience. U3 - Triennial of Contemporary Art in Slovenia at MSUM, Ljubljana (2013). She was co-director of Les Laboratoires d’Aubervilliers (2010–2012, with Alice Chauchat and Grégory Castéra). She is chief editor of Versopolis Review, and was chief editor of the Manifesta Journal (2012-14) and of L’Internationale Online (2014-2017). She curates the project Not Fully Human, Not Human at All, organized by KADIST, Paris (2017-2021). She organized symposiums at the INHA, Paris; Jeu de Paume, Paris; Tate Modern, London; and Museum of Modern Art, Ljubljana. Together with Patricia Falguières and Elisabeth Lebovici she is the co- organiser of the seminar Something You Should Know (2016 – ongoing, EHESS, Paris). Since 2019, she has been working as a tutor at the Sint Lucas School of Arts, Antwerpen. Together with Elena Sorokina, she is co-founder of the Initiative for practices and visions of radical care.

Emily Verla Bovino (New York/Hong Kong) is a researcher, writer, and artist. She studied at the Accademia di Belle Arti di Roma and participated in the Fondazione Ratti’s XV Corso Superiore di Arti Visive in 2009 with Chiara Fumai. As an artist, she has presented work with Viafarini (Milan), SOMA (Mexico City), Fieldwork: Marfa (Texas), Futura (Czech Republic), the Gulf Labor Coalition (New York), the & Now Festival of New Writing (San Diego) and soundpocket (Hong Kong) among others. In 2017, she received her PhD in Art History, Theory and Criticism from the University of California, San Diego as a grantee of the University of California Institute for Research in the Arts and in 2021 was a research fellow with the M+ Museum of Visual Culture and Design Trust in Hong Kong. Her writing on contemporary art and architecture has appeared in Mousse, Pin Up, Frieze, Spike Art Quarterly, Architectural Review, Journal of Chinese Contemporary Art and Museum Anthropology.