Through the eyes of Katinka Bock

Through the eyes of Koenraad Dedobbeleer 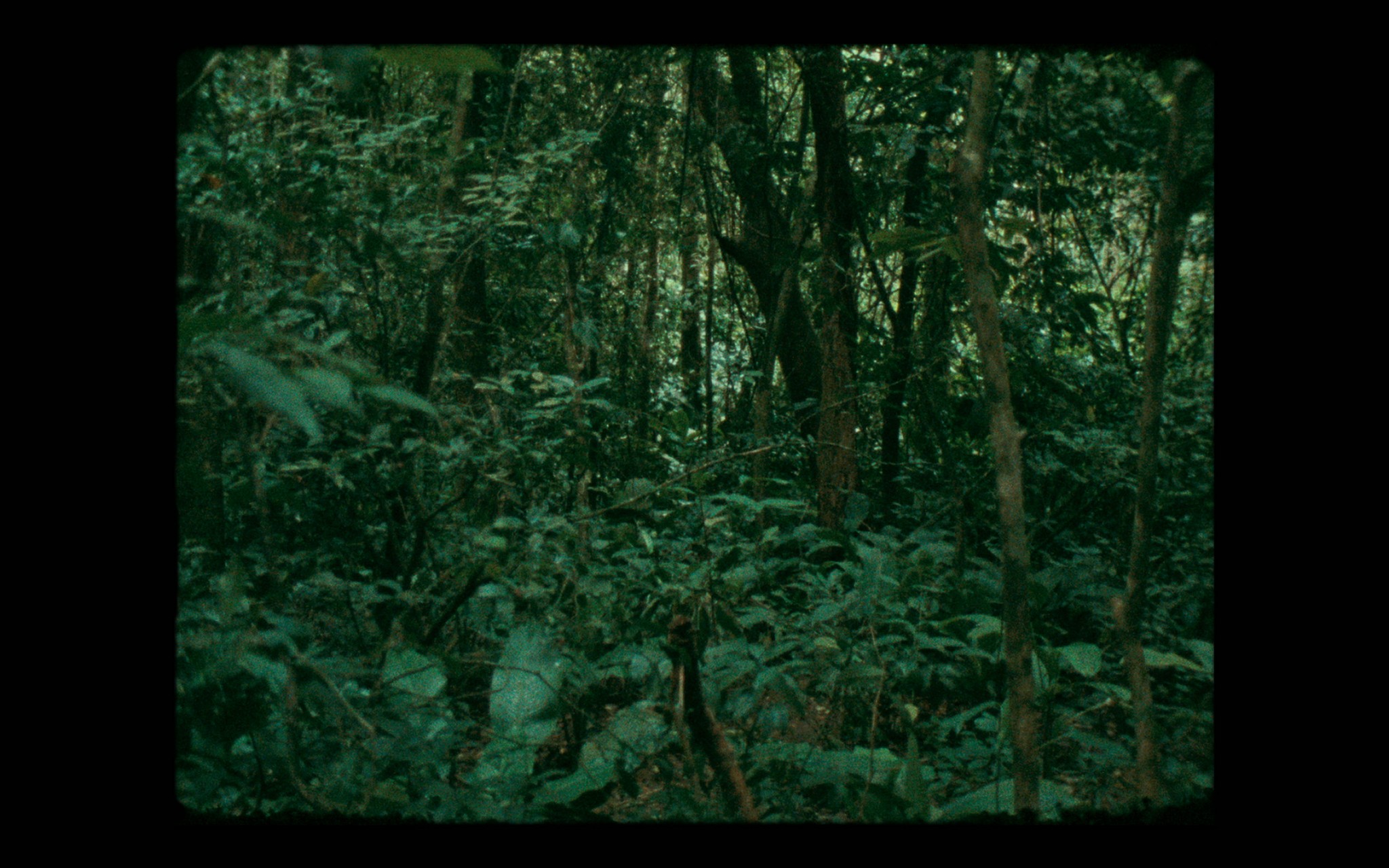 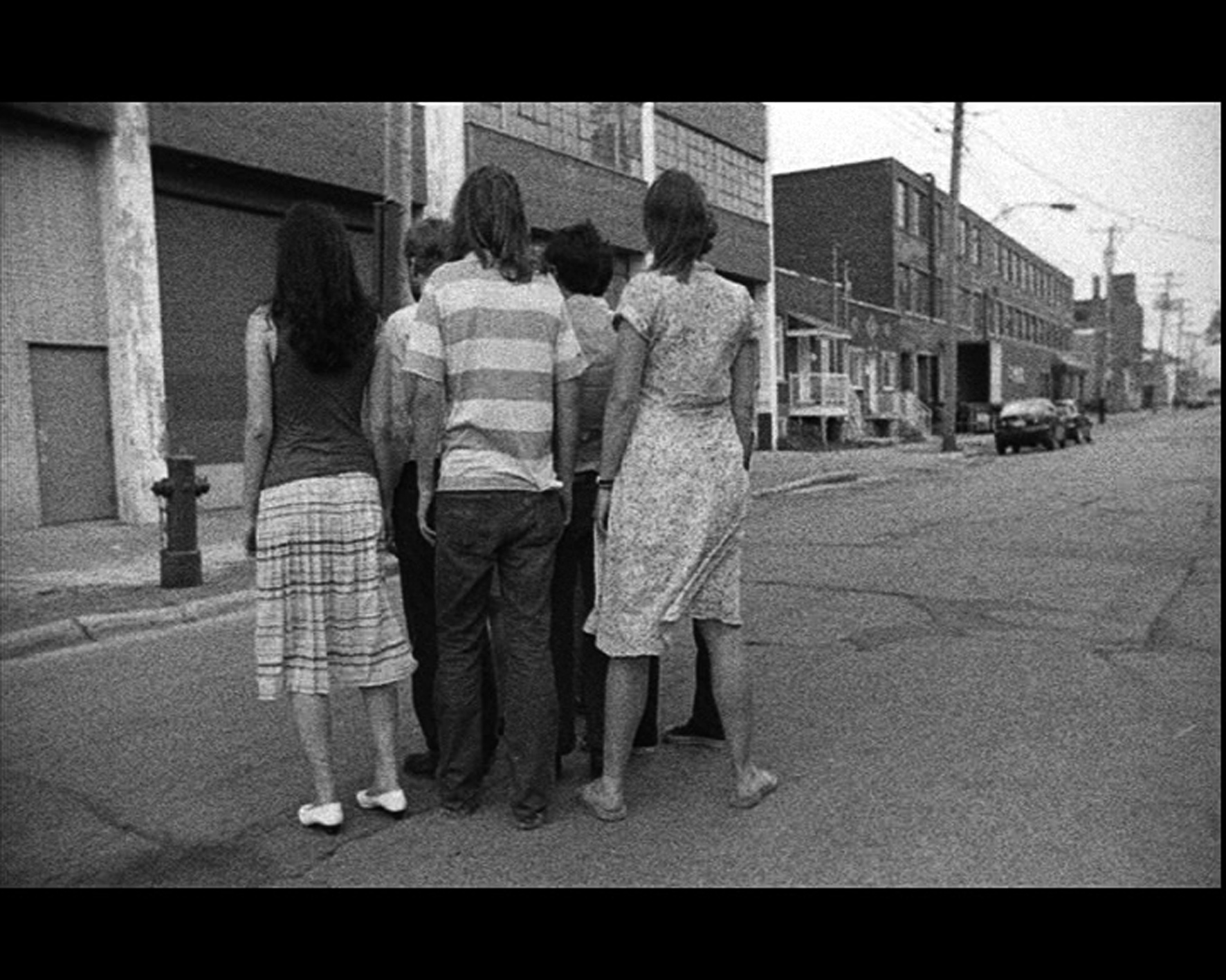 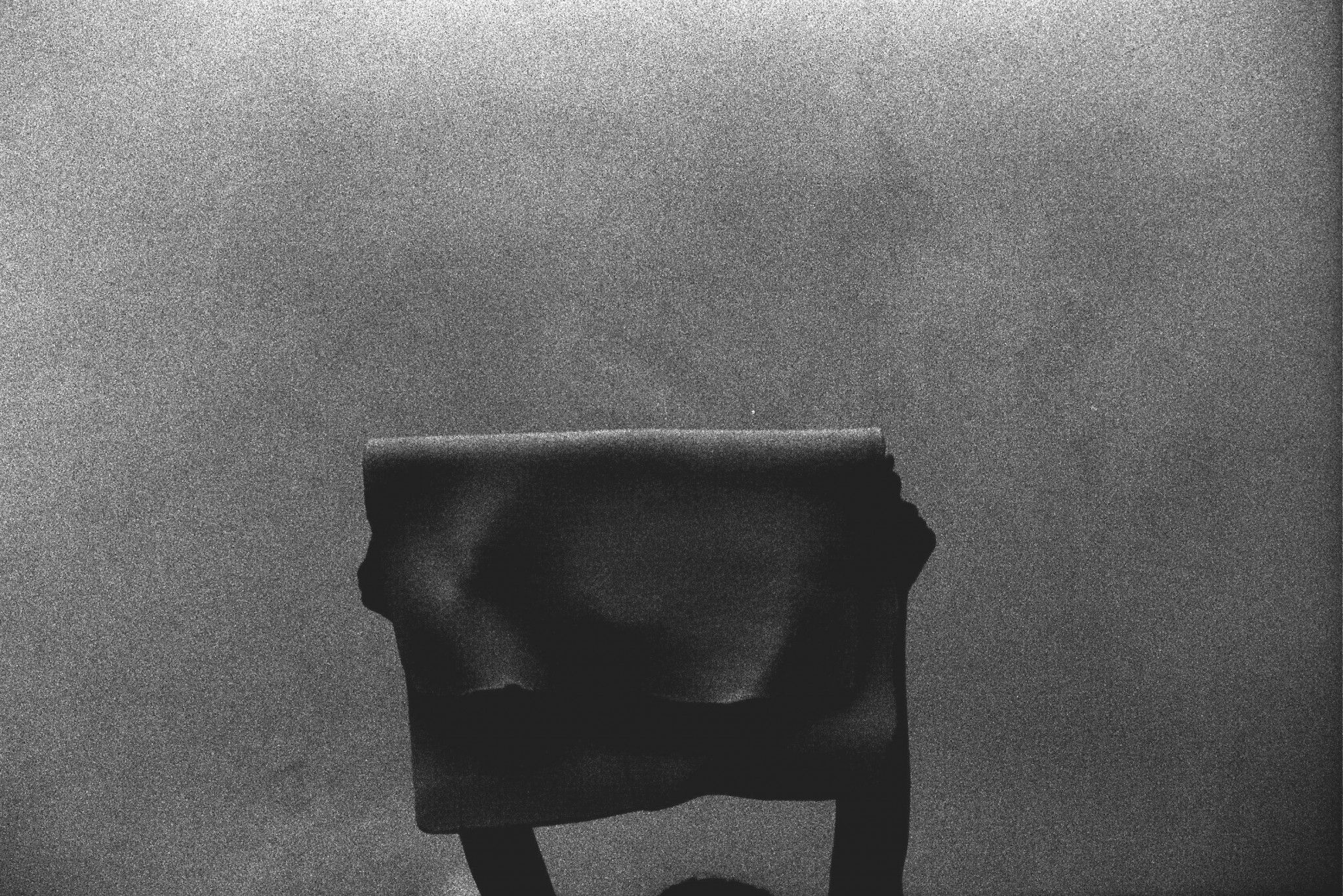 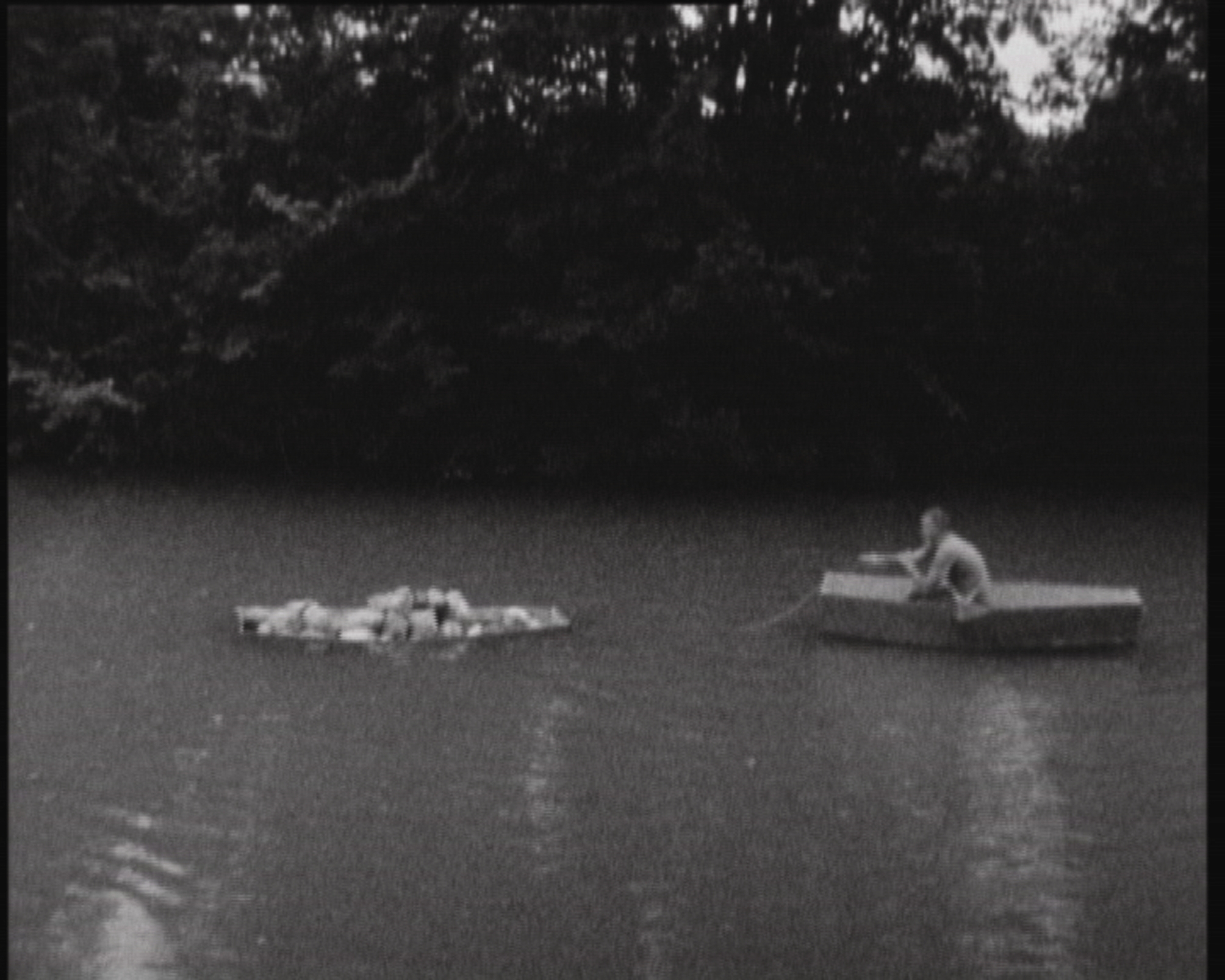 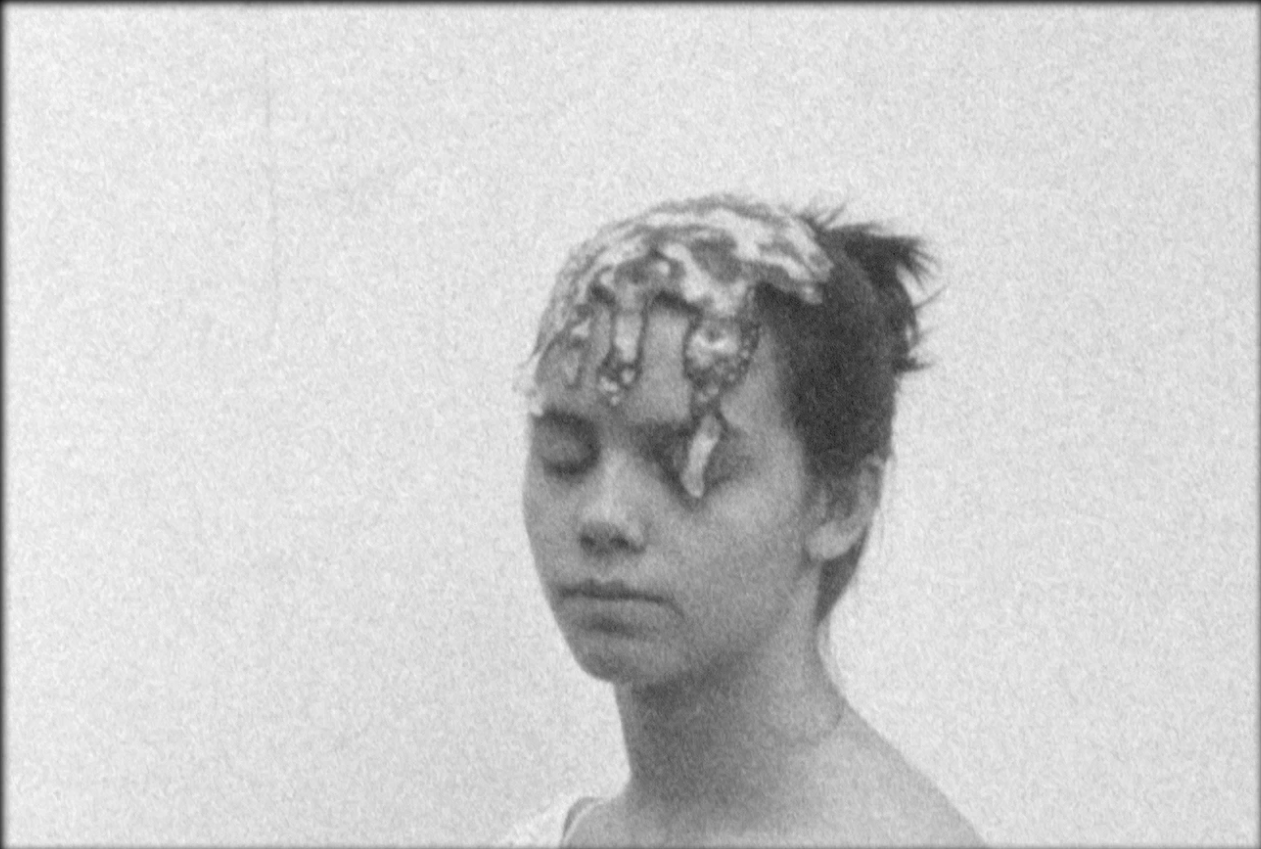 “For me, film is a helpful medium when I can’t resolve or open up a question with sculpture. I touch and I try.” Katinka Bock

Online, from March 1 to 13, 2022, La Loge presented a series of short films by Katinka Bock alongside works by guest artists Daniel Steegmann Mangrané and Ulla von Brandenburg. Conceived as an echo of the exhibition Common People (22.01 - 27.03.22), this digital programme entitled Schön von hinten offers a new view upon Katinka Bock’s practice, her interest in peripheral spaces, and the recurrent motifs of circles and lines in her work.

Katinka Bock, _o_o__o (red and green), 2017
Super 8mm, black and white, silent, 16:9, 2min 50
Courtesy of the artist and galerie Jocelyn Wolff
“I’m interested in the potential of change. I don’t try to capture reality according to preconceptions of it. The Super8 camera introduces a distance between objects and my way of seeing them. Something is missing from the film: colour of course but also all of the senses and awareness that reality can have. This is the perspective of an amateur; someone who loves the process without concern for a precise depiction of reality.” K. Bock

Katinka Bock, Zarba Lonsa, 2015
Super 8mm, black and white, silent, digitised, 4 min
Courtesy of the artist and galerie Jocelyn Wolff
Sculptures of varying sizes become the “protagonists” of this Super8 film. In a hand-to-hand relationship between partially visible figures and sculptures, anatomies in constant transformation give shape to objects and then disappear. These appearances constitute a game where container and content, forms, and the people who manipulate them interact. Sculptures, bodies, and moving images resonate as if to reveal the porosity between interior and exterior space.

Katinka Bock, Couler un tas de pierres, 2007
8mm transferred to dvd, 2 min 45
Courtesy of the artist and galerie Jocelyn Wolff
The title, Couler un tas de pierres (sink a pile of stones), oscillates between proverb and protocol. Sinking a pile of stones in water is as much a sculpture as it is an action, or a film. A boat loaded with stones collected in the fields around Château-Thierry is hauled by another boat along the Fausse Marne, a branch of the Marne, and then sunk in one place.

Ulla von Brandenburg, Around, 2005
Super 16 mm film transformed to HD video, black and white, silent, 2:45 min
Courtesy of the artist & Galerie Art: Concept (Paris), Meyer Riegger (Berlin/Karlsruhe), Pilar Corrias Gallery (Londres/ London), Produzentengalerie Hamburg (Hambourg / Hamburg)
You are beautiful from behind, you are beautiful when you have to leave. Françoise Cactus likes goodbyes and distance. I study the back of her neck, her shoulders, I listen to the words of the woman in front of me in the queue. I ask myself: which face goes with this voice?
Ulla likes the show and the space backstage. It’s one of freedom. You bow, the curtain falls. I want to see you leave, turn, go away, and never come back. Sometimes a person never comes back.
It’s 2005, a series of violent riots break out in the Paris region. You and I have just arrived in Paris, we don’t know each other yet. We live in the centre. We see backs, we film with them, sometimes out of sync. The record never plays the A and B sides simultaneously. 33 rotations, A-B-BA.
Where is the middle of the periphery? In 2005, the middle is blue. I drive on the ring road, I turn left, right. I photograph the suburbs, and forty-five minutes of a night unfolds on film. I take photos of Paris, forty-five minutes of the same night on another film. You are beautiful from behind, you are beautiful in the night.

Excerpt from Around, pour Ulla, by Katinka Bock, September 2020.

Daniel Steegmann Mangrané, 16mm, 2007
16mm, colour, synchronised 4 channel digital sound, 4min 54.
Courtesy of the artist.
This movie was shot in 16 mm film in the southwestern Brazilian rainforest, the Mata Atlântica. Following strategies of structural film making, 16mm plays with the footage roll used to film it as constitutive base of its form and content. A 16 mm film standard roll of 200 feet (60.96 metres) gives an approximate length of 5’ 33” (240 metres). That means 1 metre of film is consumed every 5.46 seconds or 18.3 cm. every second. To make this work the artist modified a 16mm film camera. The special thing of this modification is that a single engine runs, simultaneously and to the same speed, the film on the reel and the camera along the cable. Each metre of shot film corresponds exactly to a metre advanced through the woods, and the speed of this movement corresponds to the speed the film achieved inside the camera. The result is a continuous single take, a long shot travelling with constant speed through the jungle, going deeper and deeper inside it, for the duration of the roll of film, feet by feet. 16mm is both an essay on cinema and on the forest and the crossings that occur in it, a film about time and the nature of the creative act.

Katinka Bock was born in 1976 in Frankfurt am Main (Germany) and lives and works in Paris. Her practice combines sculpture, film, photography, and installation and focuses on concepts related to history, territory, customs, and symbols. In 2021, she presented Logbook at Artium Museo de Arte Contemporáneo del País Vasco, Vitoria-Gasteiz, Baskenland. In 2020 she produced Rauschen at Kestnergesellschaft, Hamburg, and as part of L’art dans les chapelles in Brittany, Bock exhibited at the Chapelle Saint-Adrien in Saint-Barthélemy. Her first institutional exhibition in Paris was Tumulte à Higienópolis at Lafayette Anticipations (2019). In 2018, she produced Tomorrow’s Sculpture, a three-part exhibition cycle between the Kunstmuseum Winterthur (Sonar), Mudam Luxembourg (Smog) and Institut d’art contemporain, Villeurbanne (Radio). Other solo exhibitions include One of Hundred, FalseFront, Portland, Oregon (2017); Zarba Lonsa at Laboratoires d’Aubervilliers (2015); Katinka Bock: 40 Räuber at MAMCO, Geneva (2013-14). In recent years she has participated in group exhibitions at Jeu de Paume, Paris; Musée d’art moderne de la ville de Paris; Kunstmuseum Bonn (2021); Credac, Ivry sur Seine (2020); FRAC Occitanie Montpellier; Musée Zadkine, Paris (2018); KIOSK, Ghent (2015). In 2019, Katinka Bock was among the artists nominated for the Marcel Duchamp Prize. She was artist-in-residence at the Villa Medici in Rome (2012-13) and received the 14th Fondation Pernod Ricard Prize in France and the Dorothea von Stetten Prize in Germany (2012). She graduated from the Kunsthochschule Berlin-Weissensee (2004) and the École nationale supérieure des beaux-arts de Lyon (2005). Since 2013, Katinka Bock has published the series One of Hundred in cooperation with Louis Lüthi. She publishes regularly with Roma Publications, Mer Paperkunstalle, Abäke, Paraguay Press and Distanz, and often collaborates with MOREpublishers.

Ulla von Brandenburg was born in 1974 in Karlsruhe and lives and works in Paris. After training in stage design in Karlsruhe and a foray into the theatre, she studied at the Hochschule für Bildende Künste in Hamburg. Her work is characterised by the diversity of media (installations, films, watercolours, murals, collages, performances, etc.) which respond to each other and which she stages according to the exhibition space. She has a perfect command of the codes of scenography, and is nourished by literature, art history, and architecture, but also by psychoanalysis, spiritualism, and magic. She borrows from esoteric rituals and popular ceremonies as well as from the mechanisms and codes of theatre to explore the construction of our social structures. Her work is internationally recognized and has been the subject of numerous solo exhibitions, at the Palais de Tokyo (2020), the MRAC in Sérignan (2019), the Whitechapel Gallery in London (2018), the Musée Jenisch Vevey in Switzerland (2018), the Kunstmuseum in Bonn (2018), the Perez Art Museum in Miami (2016) and the Contemporary Art Museum in Saint Louis (2016). Her works are part of collections such as the Tate Modern in London, the Mamco in Geneva, the Centre Pompidou in Paris and the Mudam in Luxembourg.

Daniel Steegmann Mangrané was born in Barcelona in 1997 and lives and works in Rio de Janeiro. From drawing to film, through sculpture, installation, or intervention on the landscape, Daniel Steegmann Mangrané questions our relationship to the environment and invites the viewer to physically engage in a projection or a displacement. Mangrané’s work often traces the boundary where nature meets artifice. Lines, circles, and rhombuses are drawn, cut, and projected into precise interventions that hold a powerful force of attraction. This penchant for sensory experimentation can be found in several of his works. Recent solo shows were presented in Kunsthalle Münster, Münster (2020); Pirelli HangarBicocca, Milan (2019); Institut d’Art Contemporain de Villeurbanne, Villeurbanne (2019); CCS Bard College, New York (2018); Fundació Tàpies (2018); Museu Serralves, Porto (2017); MAMM, Medellín (2016); Lafayette Foundation, Paris (2015). His work has been also featured at the group shows Liverpool Biennial (2021); Taipei Biennial (2020); Concrete Contemporary, Museum Haus Konstruktiv, Zürich (2019); I was raised on the internet, Museum of Contemporary Art, Chicago (2018); Mixed Realities, Kunstmuseum Stuttgart, (2018); Cosmic Spring, Centre Pompidou, Metz (2017); among others.