The Ceremony and The Spirit by Roe Ethridge and Zin Taylor

About The Ceremony and The Spirit 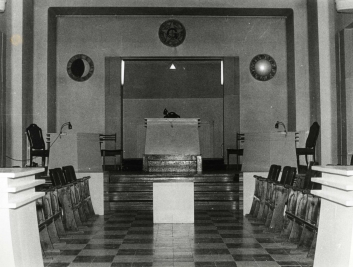 A talk by William Pesson

New perspectives on two places withdrawn from the world and time: the Masonic temple and the brothel. Places of fantasy, real or imagined, these two spaces are withdrawn from the cities they inhabit because they are plunged, not secretly but discreetly, into the imaginaries of those who frequent them. Masonic temples and brothels, places of escape from earthly or family life, answer to system of codes and norms that brought into being an entirely original architecture: although the inspirations vary, not only do stylistic resemblances exist between them, but their spatial sequences are sometimes similar as well. This illustrated journey into the most secret of human mysteries – in Belgium, France or the US – allows us to grasp this little-known architectures and to lift, literally and figuratively, the Veil of Isis.

William Pesson, a Paris-based architect and a specialist of Masonic temple architecture, has curated exhibitions and written numerous essays on the subject. His fascination for and with historicist decors has led him to the study of brothel architecture. His mastery of the subject led him to be hired as artistic advisor to Bertrand Bonello’s film House of Tolerance, presented as part of the Official Selection at the Cannes Film Festival, 2011.