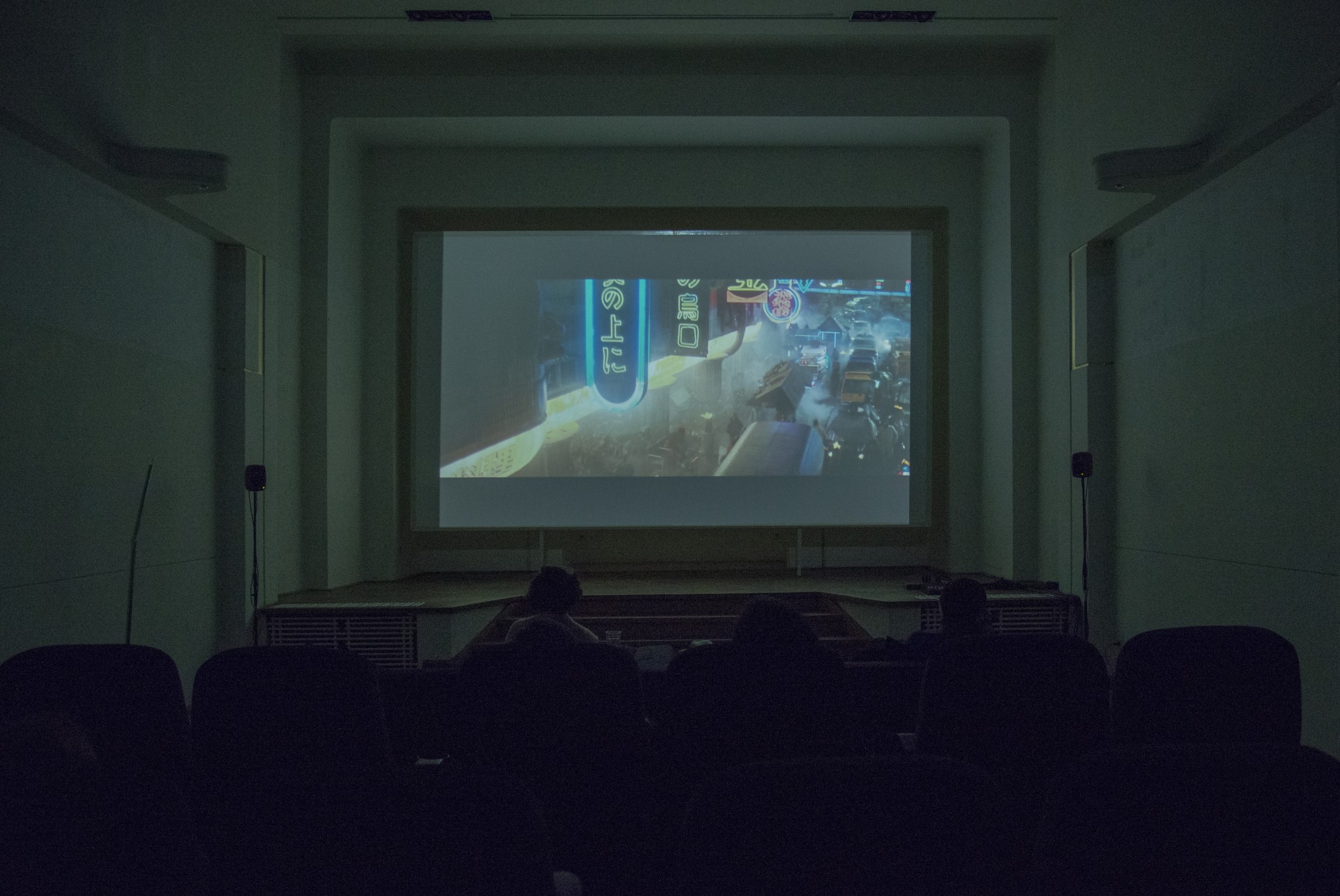 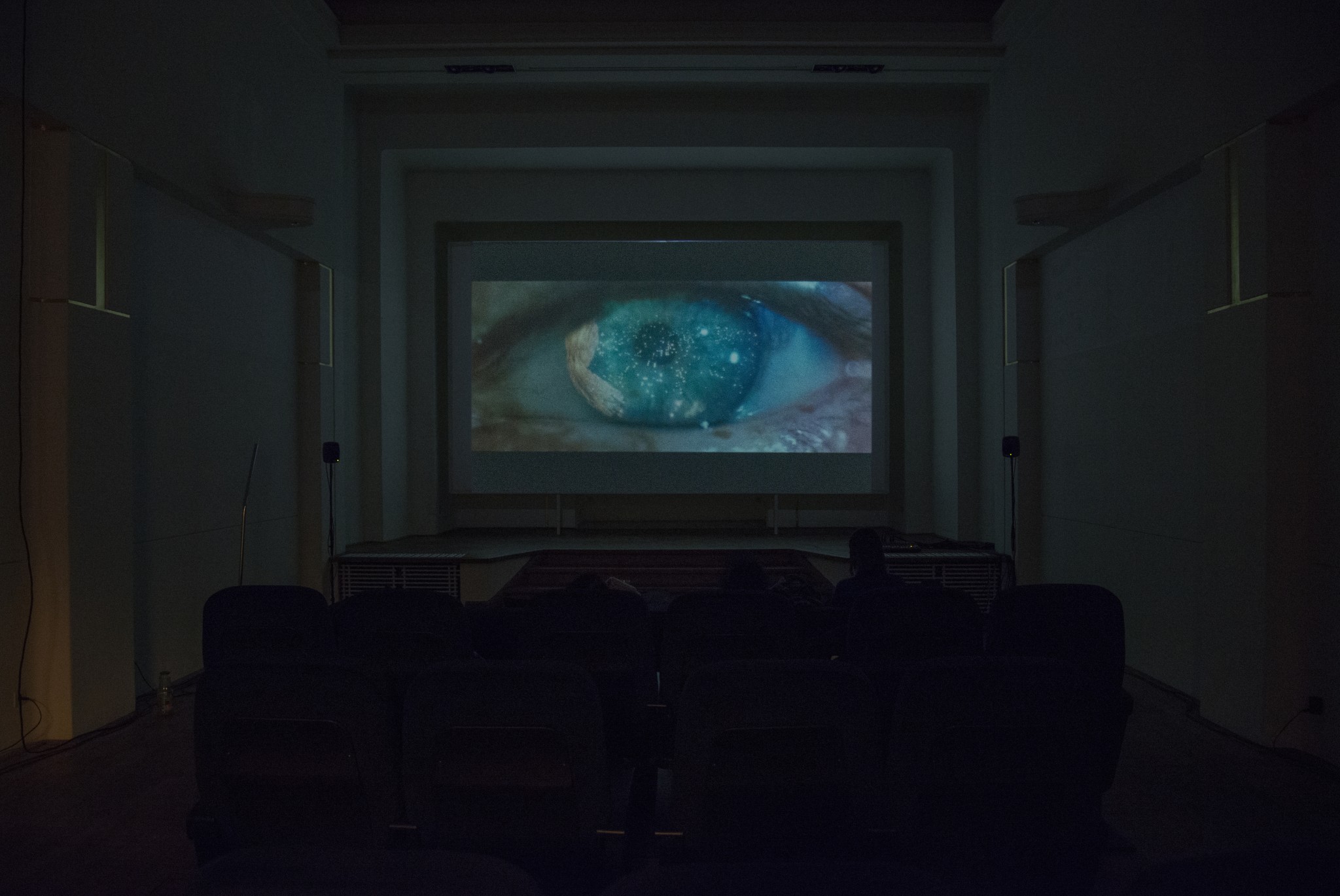 While US President Ronald Reagan is out horse riding, the Syrian President Hafiz al-Assad tries in vain to reach him by phone. Ayman Nahle's short film turns us into witnesses of a leaked 1985-phone call between Assad's Secretary and White House staff, while we see the portrait of Garage Izmir, today in Turkey, where Syrian refugees get ready for a journey to the unknown. Some have chosen a café in the area to be the waiting spot, some talk and laugh or contemplate the others. The state: waiting. Will the trip be postponed to another day? In a peculiar overlapping of two temporalities, Nahle creates a poetic postcard raising a question on non-intervention. The film premiered at Berlinale and it is screened now for the first time in Belgium.

Aleppo is a research platform based in Brussels, engaged in a program of reflections through art and political philosophy. Aleppo opens every season an Imaginary School, a free and open public program, constructed starting from a specific question and curated with arts and reflections in different formats, in the idea that artistic creation is not only an object to reflect on, but also a way to reflect with a different language on the question resonating in the present. Aleppo collaborates with art institutions in the development of public programs.

As a group of Indigenous adults argue about whether to save their government housing or their sacred landscape, their children struggle to decide how the ancestral Dreaming makes sense in their contemporary lives. Listening to music on their ipods, walking though bush lands, and boating across seas, they follow their parents on a journey to reenact the travel of the Dog Dreaming. Along the way individuals run out of stamina and boats out of gas, and the children press their parents and each other about why these stories matter and how they make sense in the context of Western understandings of evolution, the soundscapes of hip hop, and the technologies of land development. When the Dogs Talked mixes documentary and fiction to produce a thoughtful yet humorous drama about the everyday obstacles of structural and racialized poverty and the dissonance of cultural narratives and social forms.) Karrabing Film Collective was the recipient of the 2015 Visible Award. The Visible Award is the first European award for socially engaged artistic practices in a global context.

Visible is a research project in contemporary art devoted to art work in the social sphere, that aims to produce and sustain socially engaged artistic practices in a global context. visible is a project undertaken by Cittadellarte – Fondazione Pistoletto in collaboration with Fondazione Zegna, curated by Matteo Lucchetti and Judith Wielander.

Joseph Beuys once said "Art is a genuinely human medium for revolutionary change in the sense of completing the transformation from a sick world to a healthy one"
-"Yeah, right answers Mike Kelley, laughing, in an interview in 2004, but Beuys had a notion of Art as a curative process (...) I think art is an analytic process that makes you aware of the problems you have". In 2012, when french president François Hollande got elected, he was eventually proud to say that he was never reading fiction, only essays - through these words - a clear message, "I'm on the side of facts". Yeah, right. For Present Club at La Loge, Etablissement d'en face chose Sylvester Stallone's Rocky IV, because sometimes, it feels good to be able to identify the enemy.

Etablissement d’en face is an art space located rue Ravenstein 32 in central Brussels, in the shadow of Belgian political, financial and cultural power institutions and opposite the headquarters of a bank and art center Bozar. Here, in the symbolic heart of a nation, the current collective as well as many sympathizing collaborators welcome and accommodate artistic proposals from artists and other poetic individuals. We continue to celebrate every New Year together with our tradition of the Pot of Etablissement: an award for “Best Things Seen in the World”, which we honor with a Pot of Etablissement. All of these public activities taking place on this spot on planet Earth are fueled by an engagement and commitment by individuals, informed by the interplanetary interferences of Jupiter, Mars, Mercurius, Neptunus, Pluto, Saturnus, Uranus and Venus.